Several people responded to my last post with questions : let me try and answer a few of them. Willow asked for more information about my visit to the Tate Modern. Because we spent so long looking around the Courtauld Gallery, we arrived at the Tate Modern about 45 minutes before it closed for the day. I could, however, put forward a reasonable argument for having compulsory limitations on the amount of time you are allowed to spend in an art gallery at any one time. A temporal sword of Damocles not only concentrates the mind, but also stops you from trying to cram too much in thereby risking visual indigestion. So all we had time to do was to take in the breathtaking building - for those not familiar with it, the Tate Modern is located in the old Bankside Power Station - and visit the wonderful Miroslaw Balka "Box of Darkness" installation. The installation is a gigantic grey steel structure which stands in splendid isolation in the Turbine Hall. You can walk up a featureless steel ramp into the inside which is totally light-less. As you enter a little light filters in from the open entrance, but as you move further down the structure the darkness is almost physically palpable. You can't set foot in the structure without being either moved or frightened or both. It is no coincidence that the artist Miroslaw Balka is Polish and Poland was the location of the killing camps of Treblinka or Auschwitz with their steel cattle trucks and death-black gas chambers. I thought it was a massively inspiring piece of art, one well worth experiencing. 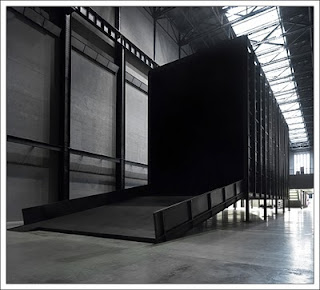 Baino asked about suggestions for places to visit in France. Let me first of all stress that I am no expert on the country and there are many parts of it that I have yet to visit, but it was my first visit to the east of the country and I was very impressed. Obviously there is a very significant Germanic influence - as John suggested in his comment, this area has been French, German and French again in less than 100 years - and in some ways it has more in common with Rhineland than the rest of France. Strasbourg was visually stunning, with its old half-timbered houses and warehouses looking like rows of pastel-shaded boxes strung out along the riverside. Again, it is well worth experiencing. 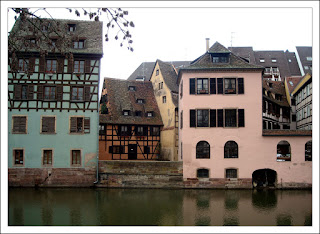 Several people commented on my picture of the castle (Chateau De Saint-Ulrich, Ribeauville). It was not the only castle we visited whilst we were away, on Friday we went to the almost unbelievable Chateau Du Haut-Koenigsbourg. It differs from the other Alsace castles in that it has been fully restored to what it must have been like in the seventeenth and eighteenth century. The restoration was carried out under the direction of Emperor Wilhelm II whilst it was under German control at the very start of the twentieth century. It stands high above the Alsatian plain like an impregnable fortified box. We visited it on a freezing cold day in early March and it was almost deserted. The arctic winds that seemed to penetrate the very stonework just added to the authenticity. And again, I would thoroughly recommend the experience. 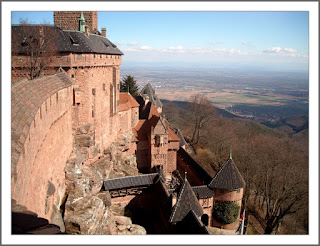