Watchman, What Of The Night - The Morning Dawns. 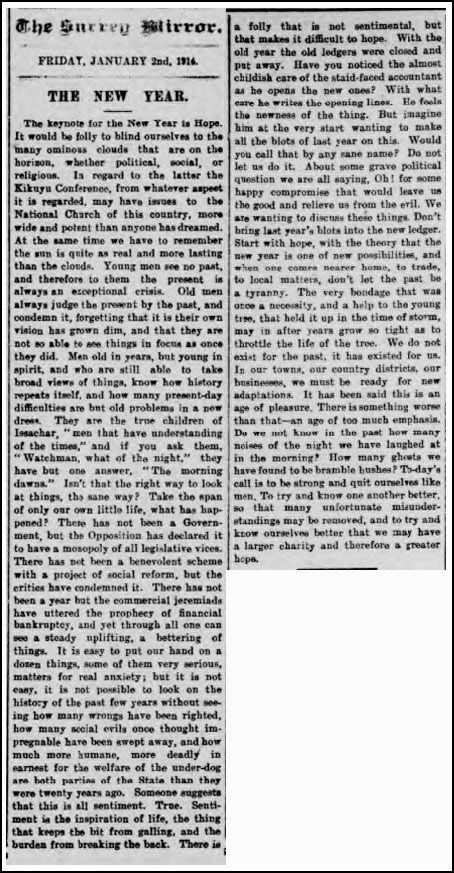 I decided to treat myself to a little extra Christmas present and when the January Sales came around I bought myself a years' subscription (Isobel, please note : 20% off) to the British Newspaper Archive. 2014 will, of course, be a special anniversary, 100 years on from the year that did so much to define the last century. I thought it might be interesting to watch 1914 develop from the viewpoint of miscellaneous local and national newspapers. Hopefully, this will be a weekly selection, and it starts with a Leader Article from the Surrey Mirror of the 2nd January 1914. In it, the writer looks ahead to the new year and speculates what it might bring. With his focus on such trifling matters as The Kikuyu Conference (an episode of religious history that is best forgotten but if you insist, you can look it up on Wikipedia) and party political arguments, you get the feeling that the Surrey Mirror, like so many other European institutions, were sleepwalking into disaster. Hope seems to permeate the sorry paragraphs of a newspaper that, 12 months later, would be crammed with notices of premature deaths in Flanders. The morning did indeed dawn - and what a morning it was.
at January 02, 2014