Sepia Saturday 337 : His Very Last Illusion Broke And Crumbled Away To Dust 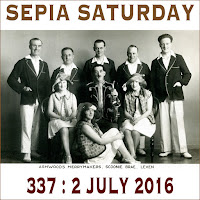 Our prompt for Sepia Saturday 337 is a promotional postcard featuring "Ashwood's Merrymakers", who were one of the many variety troops entertaining holiday makers in British seaside resorts during the 1920s and 1930s. What little information I have on the troop can be found on our Sepia Saturday Facebook Group page.

I have, perhaps, the most perfect match for the prompt image in a similar promotional postcard featuring a troop called "The Silhouettes Concert Party", who were equally touring the seaside resorts of Britain in the interwar years. But I have used this photograph in a previous Sepia Saturday entry and therefore it would be cheating to use it again. Having said that, my love of images forces me share it again - but if you want the background to it you will need to look back to a post of mine in 2011. 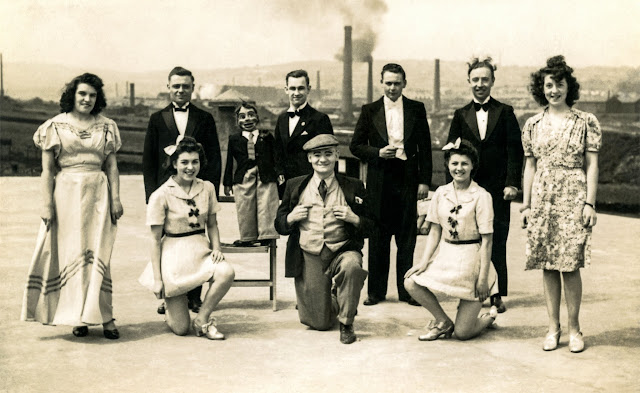 For this Sepia Saturday I would like to feature another photograph of my uncle, Harry Moore, who was a member of the Silhouettes (that is him second from the right on the back row - the one with his hair being wafted by the smog-infused breeze). This is a studio photograph which no doubt was part of the portfolio he used in getting jobs in the entertainment industry in the early 1930s. I am not sure which character he was portraying, but there is a kind of period charm about the picture. Alas, it was not successful in attracting work, by 1933 he had abandoned his hopes of following a professional career, and had settled down to marry my fathers' sister. As Noel Coward once so memorably wrote: "Poor Uncle Harry looked at her, in whom he had placed his trust, His very last illusion broke and crumbled away to dust".