The Arts Tower Is Long, Life Is Short 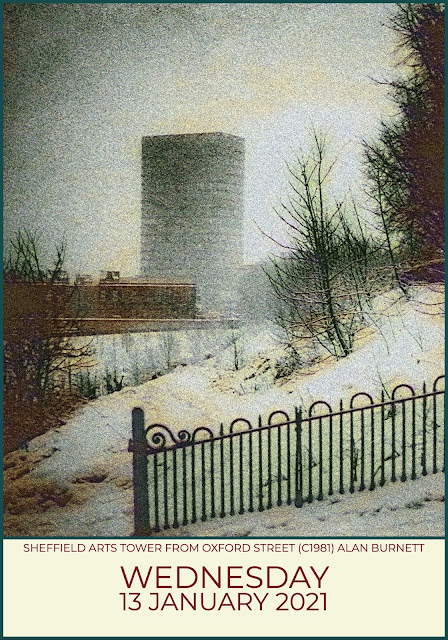 My calendar today shows a scene I am very familiar with as it was taken from the front window of the house I lived in forty years ago. Some of the Photoshopping may be new, but the photograph, the moodiness, the compelling shapeliness of the scene, all date back to my time living in Oxford Street, Sheffield. The magnificent building is the Grade II listed University of Sheffield Arts Tower (1965) which used to dominate the view from the small terraced house where we lived. Some times the sun would reflect off its glass panels, sometimes it would fade into the Sheffield mist; always it was there. I sometimes imagined the great Gods of the Arts, residing in the upper floors, like some twentieth century equivalent of Mount Olympus. My life has moved on over the last forty years, but the Arts Tower remains. The inevitable little aches and pains that are such a part of one's seventies, serve only to remind me of the carved aphorism on the wall of the Medical School which was just behind the Arts Tower, "Ars longa, vita brevis"
at January 13, 2021