Sepia Saturday 84 : Digging Around In The Anderson Shelter 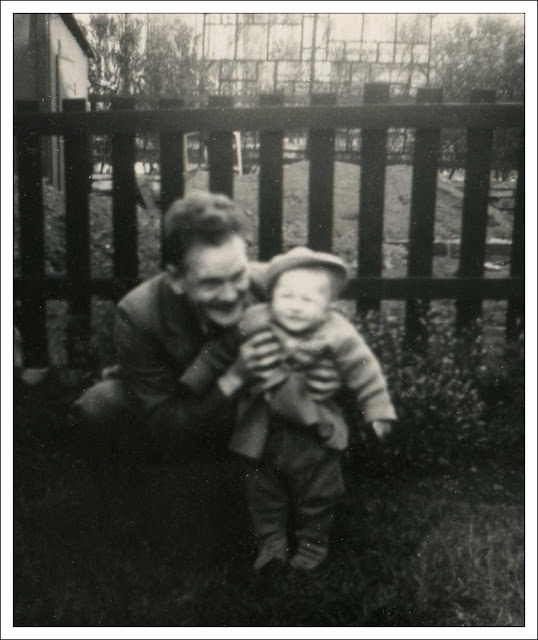 Moving on to No. 3 in the recently discovered Family Stash, and this one certainly gives us more clues as to dates. That is my father, Albert, on the left, and he is holding ... well he is either holding me or my brother Roger. Now given that my brother was born in 1943 and I was born in 1948, that definitely moves the photographs on to the mid or late 1940s. But which?


"Is that me or our Roger in that photograph?" I asked the GLW last night during a break in the pub quiz (I seem to recall we were mulling over the anagram "rotten batchelors" meaning "famous author" at the time). She said she had no idea and suggested I should try facial recognition on Picasa. "Is that me or our Roger?" I asked Maxine, the Landlady, and she quite logically pointed out that as she had never met my brother she had no idea (It must be said in my defense that I had downed a good few pints of Timothy Taylor by then). In the sober light of this morning, I checked the facial recognition on Picasa, but like everyone else it simply said it had no idea.


So a new approach is necessary. First of all, where are we? The answer I suspect is the back garden of our house at 6, Southmere Drive in Bradford - a location which would be equally supported by either a 1943 or a 1948 date. But look over that fence, what is going on in next door's garden? What did people dig in their gardens in 1940s' England : not potatoes, or cabbages or plunge pools or gazebos. No, they dug Anderson air-raid shelters. Bradford did get bombed during the war, although on nothing like the scale of some other British cities. But, if it is an Anderson Shelter, is it being constructed or destructed, dug-in or dug-out?


Research shows that the worst bombing raids over Bradford took place in 1940 and 1941, and it would therefore take an especially slow citizen to start constructing his shelter in 1943, let alone 1948 (this is, after all, Yorkshire and not Lancashire we are talking about). But it would take an over-optimistic citizen to start filling his shelter in as early as 1943, but not perhaps, 1948.

So there we are. Say hello to young Alan Burnett pictured with his Dad.


Start digging through other Sepia Saturday contributions by following the links on the SEPIA SATURDAY BLOG
at July 23, 2011