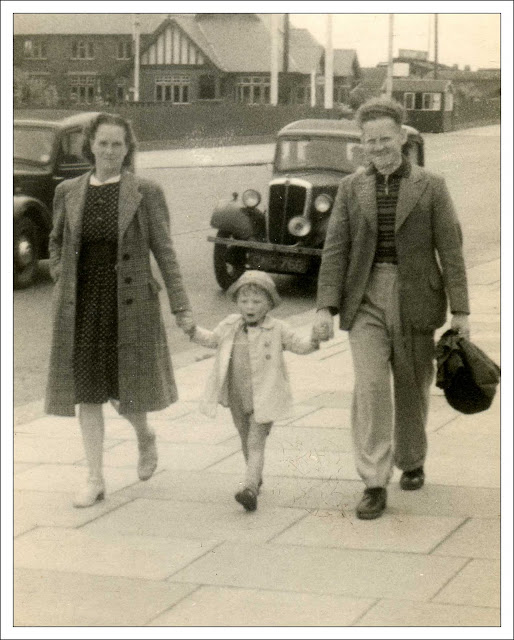 Moving on to the next photograph in the recently discovered family stash : hopefully it will not give rise to the controversy of last week. I can say with some certainty (based on a penciled annotation on the back) that it shows my mother, Gladys, my brother, Roger, and my father, Albert. Roger was born in 1943 and therefore I assume the photograph was taken in either 1946 or 1947. This would make it at least a year before I was born, which is strange as I can detect my own particular mark of the composition and execution of the photograph.

As far as place is concerned, I suspect it was taken in either Bridlington (on the east coast of England). or New Brighton (on the west coast). For decades the location of the annual family seaside holiday would swing between these two extremes with the regularity of Foucault's Pendulum. It may not be much of a clue, but the car in the background seems to have a registration number of GNC 766 and under the old system of localised registration, NC was one of the registration strings allocated to Manchester. As Manchester is nearer the west than the east I would put my money on New Brighton, but no doubt my brother will write in and say Bridlington.

You may recall that in a comment on my Sepia Saturday post last week, Roger simply said "it was fork" and challenged me to recall a family story. The story relates to an argument between my grandfather, Enoch, and his wife, Harriet Ellen. One night, the story goes, they were looking out of their window at a storm which was passing over Bradford. "That's fork lightening", said Enoch to Harriet. "Nay Enoch, it's sheet lightening", responded his wife. "Now I'm telling thee Harriet, it's fork", countered Enoch. "It's not, it's sheet", she replied. "Well, I'll say no more to thi, let this be an end to it" said Enoch, .... "but it's fork".