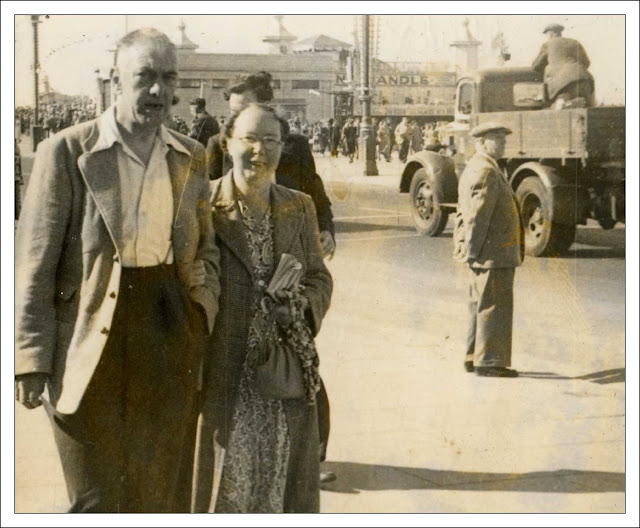 The second photograph from my recently discovered family stash, and the eagle-eyed might have already spotted it last week when it was at the top of the photographed stash. If this is the case, perhaps the eagle-eyed would stay with me a few moments and help me out with a couple of issues : date and place. Let us start with what we know : the photograph shows my mothers' sister Amy along with her first husband, Wilf Sykes. Amy was born in July 1904, the same year as her husband, and they were married in 1929.

So much we know - now step forward the eagle-eyed. My first guess on finding the photographic stash was that the photographs dated from the 1930s, but I am beginning to question this assumption. Whilst the settings and styles say the 1930s, Wilf looks a lot older than the thirty-odd years that would make him. I think we might need to advance the clock by ten years and recognise post-war austerity when we see it. Mind you, Wilf was never a well man as far as I remember. A woolsorter by trade, I can just about remember him from my childhood. I do recall all the female members of the family gathering together at family parties, and shaking their heads as they discussed his health. He died in 1963, whilst still in his fifties, so I guess those old maids could spot bodily decay with the precision of a CAT-scanner.

Let us move onto place. Obviously we have the seaside (that is a pier in the background), but which seaside. They lived in Bradford and therefore the obvious choice would be Blackpool, Scarborough or Morecambe, but I am not sure : they had a bit of a reputation of travelling the world - well at least as far as Torquay. The only clue I can make out is half a word near the entrance to the pier - N - - - ANDLE, but what that is a clue to I can't imagine.

I have a week before I uncover the next photograph in the stash, so excuse me whilst I start Googling 'andles.

TAKE A LOOK AT THE SEPIA SATURDAY BLOG AND FOLLOW ALL THE OTHER PARTICIPANTS
at July 16, 2011