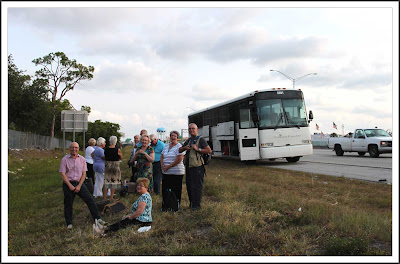 So there we were on a coach, speeding down a ten-lane highway from Miami Airport to our overnight hotel in Fort Lauderdale. We were all fascinated by the coach-driver who seemed to just about manage to steer the coach, conduct a heated debate with several other parties over a walkie-talkie radio, and wrestle with a severe astigmatism all at the same time. This, I was thinking, was yet another example of the positive benefits of experience - he must have been nearer 80 than 70 - when the coach caught fire. His first reaction was to ignore this event. At the time we put this down to a John Wayne like American bravado, but later we realised that his cataracts prevented him seeing the dense smoke wafting through the coach. Eventually, in a rather British way, someone said "Excuse me, don't you think you should stop the coach"
Stop it he did and we all clambered out whilst the driver and a passing break-down truck driver attempted to tackle the blaze with fire extinguishers. Unfortunately it was the brakes that had caught fire and therefore, even once the fire had been put out, we were going nowhere. At this point the driver became suddenly concerned for our welfare and ordered us to move well away from the coach. Most did : my good friend Harry was far more reluctant to do so. All our luggage and belongings were on that coach and Harry is a retired police sergeant - there was no way he was going to abandon the scene. As the driver became more and more insistent that Harry moved away, the more Harry (an ex- guardsman as well as an ex-cop) stayed rooted to the spot. Eventually the driver proclaimed "this is your final warning if you don't move I will ...." At this point he realised that his intended threat - "if you don't move I will make you get off the bus" - had somehow lost its efficacy. Harry stayed on guard until a replacement coach arrived.
Within a couple of hours we were sat in a magnificent hotel bar, drinking beer and eating delicious American burgers and fries, and laughing over Harry's final warning.
at July 04, 2011