A Dangerous Pace And A Stolen Half-Crown 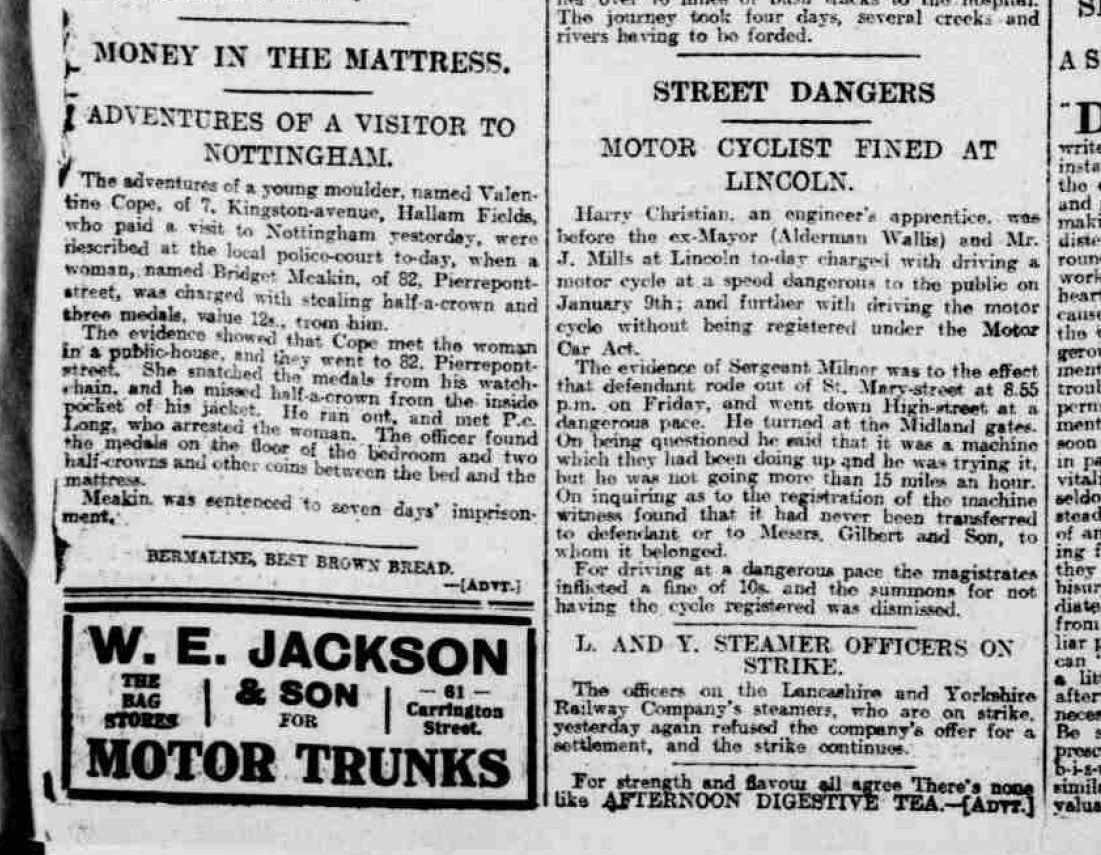 My trawl through the newspapers of 1914 takes me to Nottingham and the Nottingham Evening Post of the 22nd January 1914. This week I am not focusing on a particular story, rather I am looking at a random corner of page 5. This provides us with a snapshot of life in an industrial town at the start of a year that would later become resonant with the sound of gunfire. But in January the sounds are of a different kind : the sound of a young man divested of his dignity and his half crown by a lady of dubious virtue, the sound of a motor cycle speeding down Lincoln High Speed, and the absence of sound from the steamers of the Lancashire and Yorkshire Railway Company. So sit back with your slice of Bermaline bread and your cup of Afternoon Digestive Tea and read on :-

MONEY IN THE MATTRESS
ADVENTURES OF A VISITOR TO NOTTINGHAM
The adventures of a young moulder, named Valentine Cope, of 7, Kingston Avenue, Hallam Fields, who paid a visit to Nottingham yesterday, were described at the local police court today, when a woman named Bridget Meakin, of 82 Pierrepont Street, was charged with stealing half-a-crown and three medals, value 12s from him.
The evidence showed that Cope met the woman in a public house and they went to 82, Pierrepont Street. She snatched the medals from which watch-chain, and he missed half-a-crown from the inside pocket of his jacket. He ran out, and met P.C. Long, who arrested the woman. the officer found the medals on the floor of the bedroom and two half-crowns and other coins between the bed and the mattress.
Meakin was sentenced to seven days' imprisonment.

STREET DANGERS
MOTOR CYCLIST FINED AT LINCOLN
Harry Christian, an engineer's apprentice, was before the ex-Mayor (Alderman Wallis) and Mr J Mills at Lincoln today charged with driving a motor cycle at a speed dangerous to the public on January 9th; and further with driving the motor cycle without being registered under the Motor Car Act.
The evidence of Sergeant Milner was to the effect that defendant rode out of St Mary Street at 8.55pm on Friday, and went down High Street at a dangerous pace. He turned at the Midland gates. On being questioned he said that it was a machine which they had been doing up and he was trying it, but he was not going more than 15 miles an hour. On inquiring as to the registration of the machine witness found that it had never been transferred to defendant or Mssrs Gilbert and Son, to whom it belonged.
For driving at a dangerous pace the magistrates inflicted a fine of 10s and the summons for not having the cycle registered was dismissed.

L AND Y STEAMER OFFICERS ON STRIKE
The officers on the Lancashire and Yorkshire Railway Company's steamers, who are on strike, yesterday again refused the company's offer for a settlement, and the strike continues.