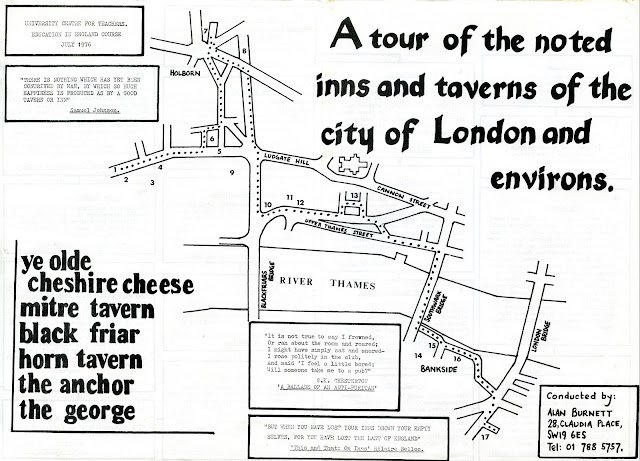 When it comes to mixing drinking and work I must confess to being a serial offender. Back in 1976 I was living and working in London: my day job was at the Labour Party headquarters in Transport House, and at night I would often earn extra money by taking parties on a tour of "The Noted Inns And Taverns of the City of London and Environs". This was a tour that I devised myself and incorporated a handful of Wren churches, a chapter or two of London history, and an armful of ancient London pubs. I used to provide the tour for overseas academics who were attending courses at London University Institute of Education, and my group of senior educational administrators from around the world would follow me dutifully as I led them to some of the more famous, and some of the less salubrious, inns and taverns of the City. I still have one of the printed programmes I produced for participants which allows me to trace the somewhat wandering route forty years later. The tour was popular with the audience and they would show their appreciation to the guide by never allowing him to buy a drink for himself at any of the stopping-off points. By the end of the evening the historical accuracy off the descriptions may have declined, but the enhanced spirit of bonhomie more than made up for it.
at May 07, 2017