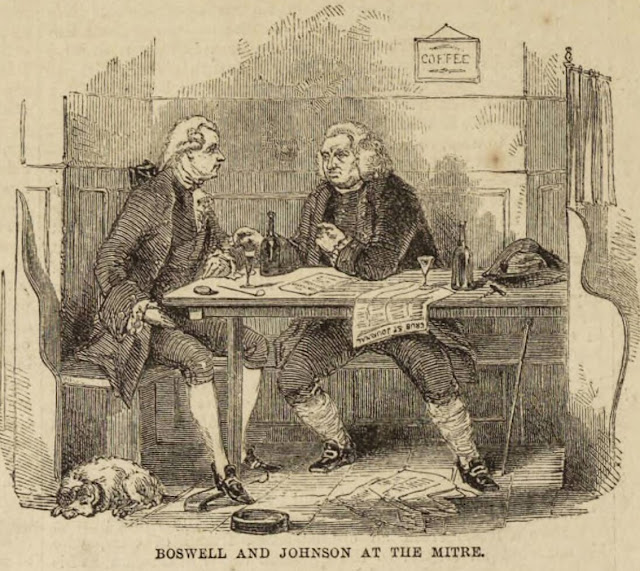 On my organised tours of London pubs, my presentation skills were occasionally impaired by too great an appreciation of the product being sampled. I always found that, whenever my normal flow of historical anecdotes began to dry up, they could easily be replenished with a story about Dr Samuel Johnson. Most London pubs worth their salted peanuts would have a roped-off chair which would claim to have been the regular seat of Dr Johnson. Many a bar would be named after the Doctor and his erstwhile biographer, James Boswell. Several tap rooms would have signs pointing out that it was in that very bar that Johnson defined some word or other for his famous dictionary.


My image today is taken from an article about Johnson which was published in The Illustrated London News in January 1852. It shows Johnson and Boswell at the Mitre Tavern, one of the pubs I used to visit on my tour. My little printed guide would include short quotations which were apposite for each of the locations we visited. For the Mitre Tavern I included the following extract from Boswell's great "Life Of Samuel Johnson".  "Two young women from Staffordshire visited Dr Johnson when I was present, to consult him on the subject of Methodism, to which they were inclined. "Come", said he, "you pretty fools, dine with Maxwell and me at the Mitre, and we will talk over the subject", which they did, and after dinner he took one of them on his knee and fondled her for half an hour". Now who does that remind you of?
at May 08, 2017