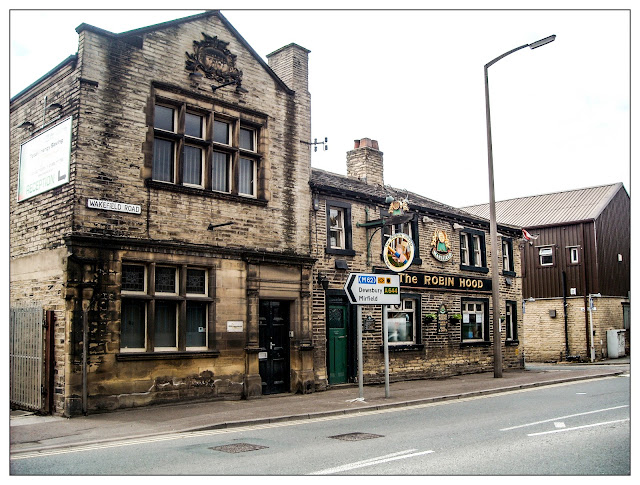 Yesterday's image was taken from a 1954 film entitled "Siege At Red River". A few years earlier, the same studio released a film called "Red River Robin Hood", which shared nothing with its later cinematic cousin other than half a title. The connection also allows us to return to England from America and, en route to our final destination, call off for a pint at the Robin Hood pub in Brighouse. In reality, this is not as easy as it might sound as they pulled the place down a couple of weeks ago, leaving a rubble-filled, dust-coated potential development opportunity where a well-loved local used to be. Luckily, I live my life in line with a number of philosophical precepts - one of the most important of which is "never walk past a pub without taking a photo of it as it might not be there the next time you pass!"

The name of the pub comes from the supposed site of Robin Hood's grave a couple of miles down the road. Legend has it that near the end, Robin went in search of Maid Marion who had become a nun in Kirklees Nunnery. He was killed before he got there, and fired a famous last arrow to identify the place he should be buried, which turned out to be just off a lay-by on the A644. I used to say that he would have been better off stopping off at the Robin Hood for a pint, but given recent events, it would have been a sad end for him to have been crushed to death by a bulldozer.
at May 14, 2017