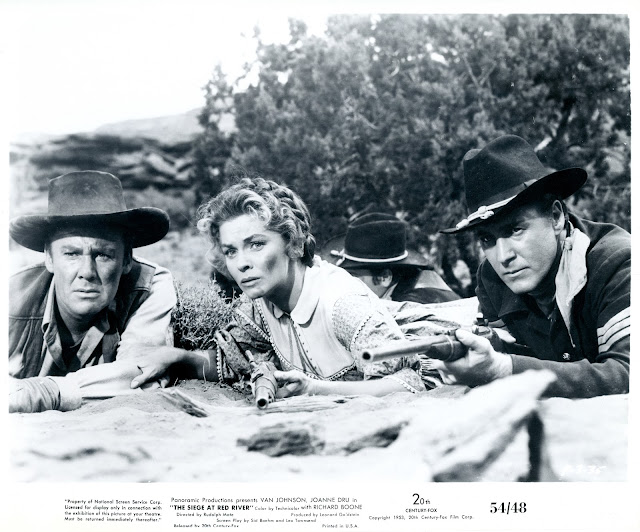 Of course, Indians go with cowboys like Sepia goes with Saturday. So following yesterday's wonderful studio portrait of a Native American, we seamlessly move on to a cinema still photograph from the 1954 movie "Siege At Red River".  I went through a phase recently of buying random movie stills - the kind that were displayed outside cinemas to tempt people to come and see the film they were advertising. The quality of the original photograph is usually good enough to produce an excellent scan and the images themselves are normally well out of copyright.


This particular image shows a trio of Hollywood stars - Van Johnson, Joanne Dru and Richard Boone - who are all involved in efforts to make sure that a Civil War Gatling Gun doesn't fall into the hands of Chief Yellow Hawk of the Sioux Nation (the philosophical and moral rationale for their actions is another question, but let us for the moment limit ourselves to the image). 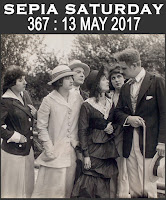 The image does not only fit in with my convoluted passage through the twenty images I am featuring on News From Nowhere at the moment, it also - by a spoonful of design and a shovelful of happenstance - fits in with this week's Sepia Saturday theme image, which is a cinema still featuring an earlier generation of Hollywood talent.

You can see more variations of this Sepia theme by visiting the Sepia Saturday Blog and following the links. You can see where this convoluted journey on mine finishes by returning to News From Nowhere over the next couple of days.
at May 13, 2017