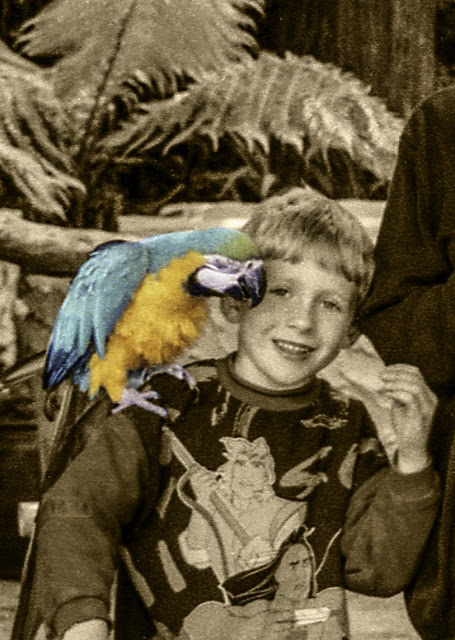 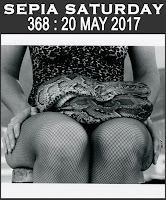 You don't have to travel far, metaphorically speaking, to get from a snake on your lap to a parrot on your shoulder. Our theme image this week is the former and my contribution is a picture of Alexander at the zoo back in 1994. To me, 1994 is just like yesterday and doesn't really qualify as a sepia image, so I had to turn to a Photoshop filter to age it. But then it seemed like a crime to render such a colourful parrot in sepia tones, so I brought it back to its colourful best.


The Sepia Saturday theme image was late going up this week because I took Isobel to Chester Zoo as a birthday treat. Whilst we were there we fondly remembered all the times we had taken Alexander to the zoo when he was a child. The photograph above - from, I seem to remember, the Welsh Mountain Zoo near Llandudno - was one such occasion. When we eventually got back home from Chester we were delighted to discover that Alexander had driven up after finishing work to spend an evening with us on his mothers' birthday. As Mr Parrot would no doubt say "Who's a lovely boy then?"
at May 20, 2017