The Lost Parks Of Huddersfield

A note to new readers : - Each week a group of bloggers from around the world post on a common theme. The weekly theme is taken from a list of suggestions contributed over time by the bloggers themselves and interpretations of the theme can be in any format. Besides the weekly theme, the only other common ingredient is inventiveness. Links to all the participating blogs can be found on the Theme Thursday blog. The theme for this week is "park". 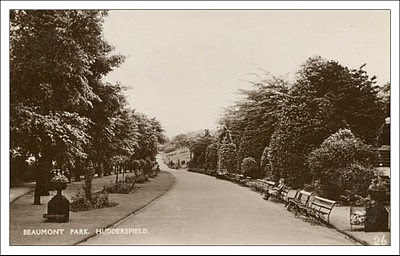 Most of the postcards in Great Uncle Fowlers' postcard collection date back to the first decade of the twentieth century and it is unusual for me to get a glimpse of his life after that time. Although I met him in the late 1950s, by then he was very old and I was still too young to take any interest in the story of his life. It is only in recent years that I have begun to piece together the story of this Keighley-born millwright and most of the clues have come from the messages on his treasured postcards. It was therefore with interest that, in searching through the collection to find a card to illustrate this weeks' theme of "park" I came across a card sent to him in June 1933. The front of the card shows a picture of Beaumont Park in Huddersfield, but it is the message side of the card that first caught my attention. 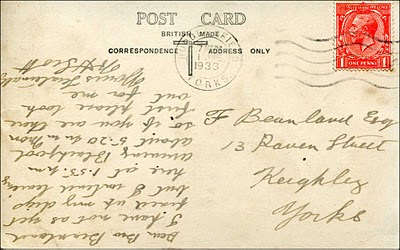 In 1933 Fowler was living in Raven Street, Keighley in a back-to-back terraced house which, as far as I can discover, is still standing today. The card comes from a certain B or perhaps R H Scott. For some reason the message has been written upside down, so to make things easier I have transcribed it.
Dear Bro Beanland. I have not as yet fixed up my digs but I intend leaving here at 1.55 pm arriving in Blackpool about 5.20 pm on Mon s if you are there first please look out for me. Yours Fraternally B H Scott.
The "Bro" (Brother) greeting and fraternal signature strongly suggests that both Fowler and Brother Scott were both delegates to a trade union or labour movement conference that was taking place in the seaside resort of Blackpool in June 1933. I have tried all the obvious candidates - the Labour Party, the TUC, and the AEU - but none of them seemed to have been meeting in Blackpool that year. But no doubt I will eventually track down the reason for the excursion to Blackpool, and another piece in the jigsaw puzzle that is Uncle Fowler will fall into place.
But the reason why I first pulled this card out of the box was the picture of the park and not my unfinished history of Fowler Beanland. What was rather surprising is that it shows a picture of Beaumont Park in Huddersfield, and although I have lived in the town for the last sixteen years I have to confess I had never heard of it. I have now done a little research and discovered where the park is. So tomorrow I intend to go in search of, what for me is, one of the lost parks of Huddersfield. I will try and find the same spot from where the postcard photograph was taken 75 years ago. As I write this I have no idea what we will find there, but by this time tomorrow, both you and I should know.
at July 22, 2010