This project attempts to provide a flavour of what is typical in my home county of West Yorkshire by focusing on ten randomly selected squares from throughout the County. Each of the 500 square metre areas has been chosen by a random number generator and here I explore each of them in images and words.
In the days leading up to me asking the random number generator to nominate the third set of co-ordinates for my ten square odyssey of West Yorkshire, I wondered how on earth the chosen square could match up to the historic interest and the natural beauty of the first two squares. An old brewery perhaps (those who know me know that I like an old brewery almost as much as a fresh pint). In the event I was close, very close, missing out by a mere forty or so years. 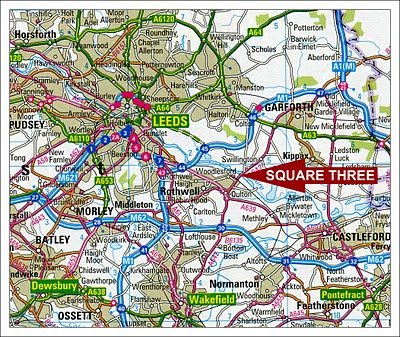 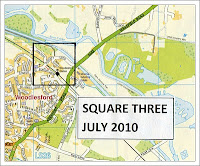 When I checked the random numbers against my West Yorkshire atlas and realised my allotted square took in a good slice of the village of Woodlesford I assembled a list of all I knew about the place : it was somewhere to the south of Leeds, it had a railway station (I recall hearing its name intoned by the lady announcing the slow train from Sheffield to Leeds), and, at some stage, it had a brewery. During my visit I did discover a lot more about Woodlesford and found that it had its' own take on Yorkshire beauty. Even though the brewery is long gone, it is anything but a one-horse (or a one-train) town.
Let me start with that brewery and with a picture of how it used to be. The drawing shows the Eshald Well Brewery of Henry Bentley & Co of Woodlesford as it would have been in the 1890s. Later, following a series of mergers and acquisitions, it became better known by the initials "BYB which stood for Bentleys Yorkshire Brewery. 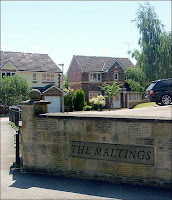 Much of the land which once housed this fine brewery site has now been redeveloped as a housing estate, and only a series of twee names give a clue to the hoppy grandeur that once was. In his monumental four volume record of "The Noted Breweries of Great Britain and Ireland", that great Victorian, Alfred Barnard, describes a visit to the brewery in the 1890s and how he was taken to see the fermenting house, "a lofty, well-ventilated building, measuring 70 feet by 40 feet with its ten slate fermenting squares, with latticed pathways between them, each fitted with copper rousing pumps, worked from shafting connected to the main engine" Ah, do the residents of the neat new houses know where they are sleeping at night?
But the fine industrial heritage of my square has not been all buried under bijou properties. The Aire and Calder Navigation still runs through the top corner of my square and as I watched from the road bridge I was delighted to see a group of old barges approach. This was a rare sight indeed as they were the last of the "Tom Pudding" boats returning from Leeds where they had been taking part in a festival. Tom Puddings were a unique system of container barges developed for moving coal along the Aire and Calder and Calder and Hebble canals in West Yorkshire. In a way they were a precursor to the idea of a container ship, except the flat bottomed containers filled with coal were strung together and floated rather than piled high on some ocean-going ship. 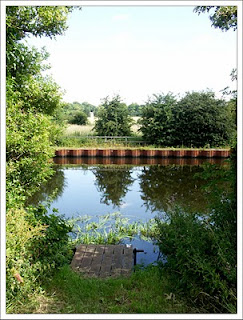 My square was not all industrial archeology. You can walk along the canal path - which forms part of the magnificent Trans-Pennine trail - and see little but green fields and hear little but the buzz of insects and the songs of birds. There were some fine buildings within the part of the village that fell within my square, one of the finest being the building that, until twenty years ago, was the local church. All Saint's Church was originally build by Bentley family (the brewers) in the 1880s but was converted into a private house in the 1990s.
Breweries and barges aside, the housing mix was perhaps the most fascinating element of the square. Within 500 square metres you can find one of the most eclectic mixes of houses you could ever hope to discover. There are fine old Yorkshire stone terraced houses, stunningly adventurous new designs, converted public buildings and suburban semis.
The overwhelming feeling you get from a visit to Woodlesford is that it is a nice place. Having been introduced to it by serendipity, I will return (my square contained a fine looking pub - The Two Pointers Inn - which was not open during my early morning visit and therefore a return trip is necessary). Whilst my first two squares were spectacular in their own ways, they were less representative of West Yorkshire at the beginning of the twenty-first century than Square 3. If the random number generator is right, and this is typically West Yorkshire, I for one will not be complaining.
To read the other installments of this series follow these links :
Square 1 : Little Germany
Square 2 : Thimble Stones
at July 20, 2010