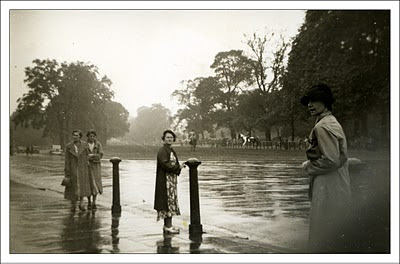 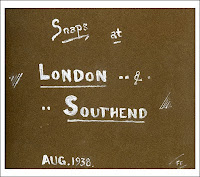 My Sepia Saturday photograph this week was taken by my Uncle Frank. Frank Fieldhouse was an archivist's dream - he recorded dates, places, and names with the thoroughness of an obsessive compulsive. His photographs were collected into neat albums, each album dedicated to a particular holiday or resort. The photographs themselves were not great - he rightly referred to them as "snaps" - but their lack of artistic polish is part of their charm. Frank was regularly guilty of three pitfalls awaiting the keen amateur photographer in those days when cameras were less sophisticated : he had difficulty keeping his horizon horizontal, he frequently included his thumb in his shots, and his intended subject would often be lost in the background. Unintended extras would often feature as the stars in his photographs as can be seen in the above example taken in Hyde Park, London in August 1938. 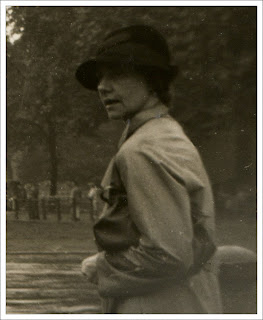 I suspect that the intended subject in the photograph was Frank's sister - the lady between the posts in the park. But it is the girl inadvertently wandering into the picture - half hidden behind the Fieldhouse Thumb - that captures my whole attention. Some time ago I was trying to write a story set in the 1930s, the main character of which was a young woman, a typical London career girl of the time. In my attempt to describe her I trawled through endless web sites devoted to the  fashions of the 1930s. Somehow I couldn't get her quite right - she was always a museum model rather than a real person. I never finished the story. But having seen Frank's wanderer, I am tempted to return to it. Here is the real woman, caught by chance by my Uncle Frank and his Box Brownie.
Take a look at what everyone else has done for Sepia Saturday 32 - there are links to all the posts on the Sepia Saturday Blog.
at July 17, 2010