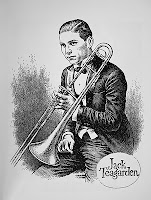 For me, the word blue is a one-way street leading to the blues. But rather than the pure blues, the delta blues or Chicago blues it takes me to the great Jack Teagarden singing what was to become a theme song of his "Meet Me Where They Play The Blues". I was in my teens when I first heard this. Somehow it slotted in well amidst contemporary sounds such as the Beatles and Dylan. I fell in love with both the song and Big T's singing and playing. I've never been able to get it out of my mind since - even during the days of deafness. Many years ago I wrote a story which had a large Greek philosophy professor turned European Commission bureaucrat who would surprise his colleagues by playing the trombone and singing with a Texan accent. The song he sang in the story - Meet Me Where They Play The Blues, of course. To illustrate this post I searched for a YouTube clip of Jack singing the song, but there wasn't one. So I added one. It can count as my contribution to humanity.