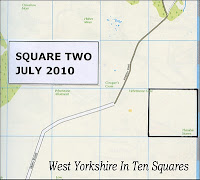 Square two of my ten square odyssey and serendipity still seems to be granting me her favours. After being directed to one of the most iconic industrial quarters of the county last week (Square One : Little Germany), the random number generator now sends me into the very heart of one of the most remote areas of natural beauty - Ilkley Moor. Leaving my car at the small car park near the Whetstone Gate radio masts, whistling "On Ilkley Moor 'Bart Hat", I set out on foot across the moor in search of my allotted 500 metre square. The map had been sparing in detail about the square (my own fault for choosing a road atlas for my odyssey) and I had been slightly worried that it might be entirely enclosed private land. But luck was with me, a footpath dissected my square and mother nature had thrown in some ancient standing stones for good measure.
Someone once put a comment on one of my blogs saying that they had never quite understood what moors were. Growing up in an area where the moors are always your near neighbour, I had at first been surprised by the comment. It was only later that I realised that hereabouts we take these majestic borders of civilisation for granted, these uncultivated blankets of bracken, gorse and peat.
High on the top of Ilkley Moor you can look down on civilisation like some Yorkshire God. To the south is the Aire valley and the towns of Keighley, Bingley and Shipley. Just a little further south-east and you can see a hint of Bradford with its urban outskirts clinging to the valley. In the distance you can spot Emley Moor mast signalling the southern confines of the Metropolitan County.
To the north the view is just as spectacular. Wharfedale cuts an east-west path through the hills giving shelter to the towns of Ilkley and Otley. Lest you think that you have strayed into some rural idyll isolated from the outside world, you can catch a glimpse of the ominous white golf ball structures at Menwith Hills - one of the largest electronic monitoring and missile defense sites in the world. 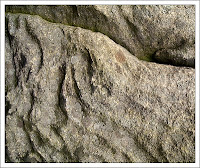 My chosen square was rich in views but what did it possess in itself? Well, there was a wall, the occasional sheep, some stone flags for a footpath across the boggy ground - and there were the Thimble Stones. These massive lumps of millstone grit had been abandoned by some long vanished glacier with all the carelessness of a toddler throwing away his toys. Over the aeons, the wind and the rain had smoothed them, ridged them, and shaped them so that now they resemble outcrops of bone sticking out through the skin of some ancient monster. I am told that they might have been used as altars by the prehistoric inhabitants of the moors, but during my visit the only supplicant was a grazing sheep.
So far my odyssey has shown me two sides of West Yorkshire and also two interpretations of beauty. The beauty of Little Germany was a beauty shaped by industrial man, the beauty of the Thimble Stones was the ancient beauty of nature itself. I am not sure where square three will take us - I have yet to ask the random number generator to work its magic - but wherever it may be, I will go, and I will report back to you on what I find.
To read other installments of the West Yorkshire In Ten Squares series click here.
at July 15, 2010