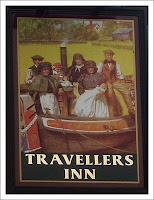 It seems to be some time since I featured one of my "Great Yorkshire Pubs" on the blog, so let us try and put things right by paying a visit to the Travellers' Inn in Hipperholme. Get yourself a drink, pull up a chair and soak up the atmosphere of this fine Grade II listed eighteenth century ale-house.
THE TRAVELLERS' INN
Tanhouse Hill, Halifax HX3 8HN
Tel : 01422 202 494 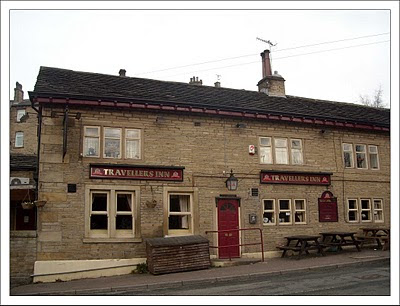 At first you might be tempted to ask what is so special about the Travellers'. Despite its historic building listing, it doesn't look particularly spectacular (it is probably listed for being typical of the period rather than for being outstanding). Until recently it could have been one of a hundred such pubs which could have been found in each Yorkshire town. No nonsense, stone-built, utilitarian temples to Bacchus : or at least places you could get a decent pint at the end of a hard day's work. But if you are tempted to ask the question, let me tell you what is special about The Travellers'. It is still open. Not only that, it appears to be thriving.
Until Saturday evening I hadn't set foot in the Travellers' for forty years or more. I remember taking some visitors from London there, to give them a feel of a real Yorkshire pub. Back then it was very much a "local" and conversation would still stop when a stranger walked through the door. I probably advised my companions to enjoy their visit because such pubs would not still be around in forty years time. In a sense I managed to be right and wrong at the same time.
The fabric of the building is still very much the same, although the stone has been cleaned and the roof straightened. Inside, the little narrow rooms and snugs have been largely opened out - although my wife and I still managed to find a semi-snug in which to enjoy our drink on Saturday evening. From the cars and the bicycles parked outside, I would guess that the clientèle is less "local" than of old, but it is no tourist-trap, and you still feel as though you are entering a pub rather than a theme park. Without a doubt, the beer is better than it was 40 years ago : the Travellers' is now owned by Ossett Brewery and its' range of beers will gladden the heart of any real ale enthusiast. It is a "beery" pub and consequently can feel a little intimidating to the non-enthusiast and its' lists of beers and gravities, hops and fermentations can be a little overwhelming. But I have to say, it fights hard against being over-serious and it remains the kind of place I would happily take a visitor to these parts. A place I would happily take a traveller to : what greater praise can there be. 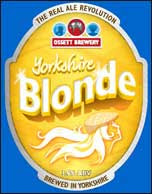 DRINKING NOTES: I had a pint of Ossett Brewery's Yorkshire Blonde (3.9% ABV) which somehow seemed suitable for the venue. This is very much a 21st century real ale with a colour that, from a distance, could be mistaken for lager and a taste which contains all the elements of a hoppy brew with the slightest hint of sweetness. A good introduction to good Yorkshire beer - a good pint for a traveller to enjoy.
at July 26, 2010