Sepia Saturday : Pride And The Machine 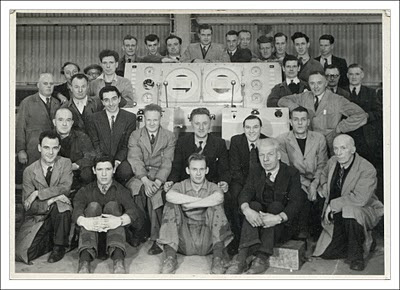 My father was a fitter. I have never been quite sure what a fitter is (my brother inherited all the mechanical aptitude in our family), but it was a skilled job that gave him the right to full membership of the Amalgamated Engineering Union (AEU) once he had served "his time" as an apprentice. Most of his working life was spent in building, repairing and maintaining wrapping and packaging machines, first at a printing and packaging firm in Bradford and later at the Halifax factory of the toffee and sweet manufacturer, John Mackintosh and Sons (the makers of the celebrated "Quality Street" selection). My photograph shows my father and a group of his colleagues at, what looks like, the launch of a new machine. The machine is a splendid 1950s affair with gear levers, push buttons and important looking dials. It has the look of a prop from one of those 1950s low-budget science fiction films - "The Invasion Of The Sweet Wrappers"  perhaps. But however silly the machine may look from the lofty heights of the micro-computer age, there is an almost palpable pride amongst that group of people : pride in the creative process, pride in industry. Maybe these days twenty or thirty fellow workers gather around the photocopying machine and have similar photographs taken. Maybe they pile up volumes of reports, project proposals and database print-outs and proudly sit alongside them like a mother hen showing off her eggs. Maybe. But, somehow, I doubt it. 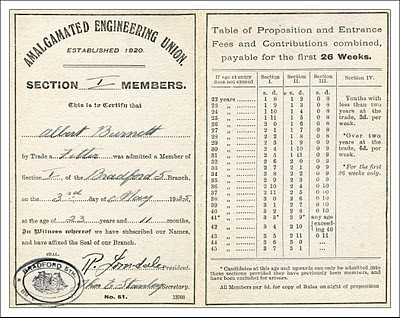 As a bonus, I found my fathers' old Union Card. The fact that it had been carefully saved again signified something - a pride of achievement at the launch of a career. Maybe those lucky enough to be starting jobs in these difficult times will preserve a similar token, a similar document - whatever it may be. Maybe, but somehow I doubt it.
Take a look at all the other wonderful Sepia Saturday posts which are listed on the Sepia Saturday Blog.
at July 09, 2010