A Locked Bathroom And A Sober Night In 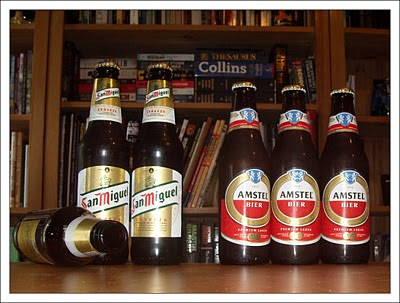 I had everything prepared. I like to have everything prepared for the World Cup Final. It's a bit of a tradition which started in 1974 when I eagerly prepared to watch the Netherlands play Germany in the final of that year. We were living in Wimbledon at the time in the wonderful house owned by Jane's parents. Jane's father had specially ordered a crate of brown ale for refreshments during the match. I decided to have a celebratory bath before kick-off and retired to the fine old bathroom which for some reason had iron bars to the window. Bath completed I was about to take my seat and pour my first glass of brown ale when I discovered the lock to the bathroom door had somehow failed. I was imprisoned in the bathroom, completely unable to make my escape. I could vaguely hear the sound of cheering coming from the television room but all I could do was to bang on the door in the hope of eventually attracting someone who would rescue me. Finally, Jane and Issy (the Good lady Wife) noticed my absence and traced me to my prison cell. They found the situation highly amusing and made wonderful suggestions like a promise to feed me spaghetti through the keyhole to stop me from starving. Various keys were tried but the mechanism had seized up entirely and the door was of considerable vintage (and therefore stout timbers) and was resistant to the most desperate shoulder charge. I was eventually freed - late in the first half as I recollect - by Jane's mother who smashed the door down with a fourteenth century battle axe that had been in the family for generations and had been awaiting just such an emergency as this. The episode made a considerable impression on my young psyche and I have always prepared for World Cup Finals with a mixture of care and trepidation ever since.
This year I had managed to acquire a six-pack of Spanish beer (San Miguel) and a six-pack of Dutch beer (Amstel) and in expectation of a thrilling and high scoring final I had promised myself a bottle of the appropriate brew each time a goal was scored. As I watched the match my thirst increased in inverse proportion to my enjoyment of what was a pedestrian final. By the time the one and only goal was scored - after 115 minutes of play I was seriously considering transferring my sporting allegiances to an alternative high-scoring came (just think what you could do with the same approach to cricket). It was a sober night in - but at least I didn't get locked in the bathroom.
at July 12, 2010