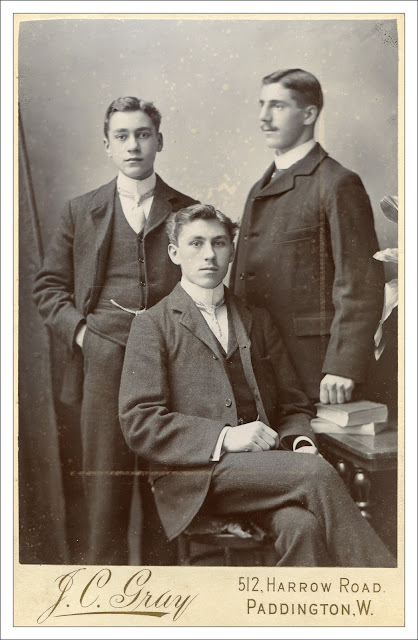 I bought a job lot of old photographs off eBay the other day intending to put them away so there would be something to amuse me on cold winter evenings. The problem is that I can't resist dipping into the drawer where they are kept to see what delights they offer. I am not expecting to find anything rare or anything valuable, nor am expecting to find photographs of people or places I recognise. Equally, I don't expect to solve any great mysteries by reuniting Jocelyn Trumpington-Baxter to his long lost third cousin Cedric. My love of old photographs is a quixotic affair designed to launch nothing more substantial than the occasional flight of fancy.

Take this Cabinet Card of three men taken in the London studios of J C Grey. I have no idea who they are but, from the style of dress, I would guess that the photograph was taken in the very first years of the twentieth century. The pose is slightly odd, with two of the young men (surely brothers) looking straight into the camera whilst the third (an older brother or maybe even the father) appearing in profile and looking off to the left of the photographer. Whilst the two younger men are in sharp focus the older man appears slightly blurred. At first I thought the third figure had been "burnt in" (photographers sometimes did this to artificially reunite family members) but this does not seem to be the case here (the aspidistra leaf comes in front of the jacket my dear Watson!)
My fancy is in full flight now and circling around the concept of relationships between fathers and brothers. By pure coincidence I am currently listening to the complete Audiobook version of Edward Kennedy's True Compass whilst I drag poor Amy on her daily walks around the mean streets of West Yorkshire. So now I am looking at a photograph of Joe Kennedy looking suitably stern and maybe Jack and Bobby looking so full of potential and possibilities. And then it is my father with me and my brother : my brother looking serious, me looking slightly lost and my father looking to see if the bus is coming.
It is probably better to keep such fanciful flights to myself. Better still, I will keep the old photographs hidden away until those cold winter nights come along.
at July 13, 2010