A Devil Of A Do In Scarborough 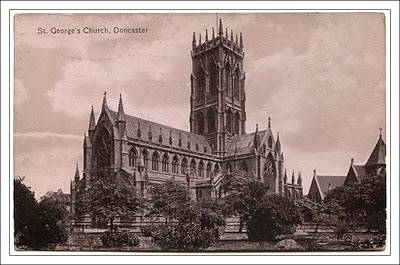 It seems ages since I featured a postcard on the Blog so let's put things right with this 1914 postcard of St George's Church in Doncaster, South Yorkshire. It is a recent addition to my collection, being from a batch the Good Lady Wife bought me for my birthday (a selection of old postcards and a large bottle of Single Malt - now there's a woman who understands me!). The picture is not particularly exciting nor is it of any great historical interest : something like the same scene could be seen by a visitor to Doncaster today. But to those of us who are addicted to the message side of postcards - I would like to call us back side enthusiasts but that might give the wrong impression - the date of the postmark is the most intriguing element : 21st December 1914, just a few days before the first Christmas of the Great War. 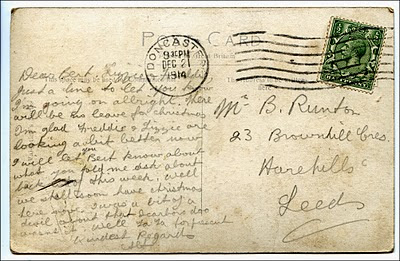 The message reads as follows:

"Dear Bert, Lizzie and Freddie, Just a line to let you know I'm going to be alright. There will be no leave this Christmas. I am glad Freddie and Lizzie are looking a bit better now.  I will let you Bert know about what you told me (to) ask about back end of this week. Well we shall soon have Christmas here now. It was a bit of a devil about that Scarboro do wasn't it. Well ta ta for present. Warmest regards, Alb".
How can so few words be infused with so much possible meaning, I am almost tempted to enter the message in one of those meme contests where you have to write a story in less than 55 words. But the words wouldn't be mine, they would be Alb's and the denouement is almost too sad to contemplate. There was no leave that Christmas and no peace for many a Christmas to come. In the trenches in Flanders, the mud had yet to reach optimum consistency : but more blood would be added to the sickening mixture in the months to come. Did Alb contribute to this mix in the way so many ordinary young men did? I could find out - with the information available on-line it would be relatively easy to find his service record - but for the moment I am holding back. I am not sure I want to know.
It is possible, however, to shed more light on the "bit of a devil" of the "Scarborough doo" he alludes to in the postcard. On the 16th December 1914 two German battlecruisers and a light cruiser launched a naval attack on a number of east coast towns, in particular the holiday resort of Scarborough. Whilst the cruiser laid a minefield out to sea, the battlecruisers opened fire on a coastguard station and yeomanry barracks in the town. They also fired on the old castle and the Grand Hotel which they seemingly mistook for a gun battery. The raid resulted in the death of eighteen people in Scarborough and caused much outrage in the British press both because it was seen to be in breach of the "rules of war" and because the raid had not been prevented by the British navy. The full story of the raid can be found here.

Yet another example of how a dog-eared old postcard can take you on the most extraordinary journey.
at July 05, 2010