Memories are ephemeral things which only seem to be able to survive by attaching themselves to physical objects, like a snowflake coalescing around a grain of dust. Here on Sepia Saturday we tend to think of the photograph as the grain of dust - how many times have I and others said that our photographs have the ability to preserve memories - but you can't photograph a memory. It is the object that forms the subject of the photograph that is the fixative agent, it is the object that is the grain of dust within the snowflake of a memory.
All this serves as an introduction to a photograph of my father in his old Commer Van. It may just look like an old van to you, but to my father it was a pride and joy - his first four wheeled vehicle, an object that was worshiped each Sunday by a liturgy of washing, cleaning, and polishing. To me, this mediocre picture of this prosaic vehicle is a rich tapestry of memories.
The picture must have been taken in the early 1960s. My father worked at the Mackintosh's Toffee factory in Halifax and the firm would sell off vehicles that had been used by their traveling salesmen to workers. It was bright red - the same shade as that used by the Post Office, and we would always have people running after the van trying to push letters through the window into what they thought was the departing Post Office collection van.
I spent much of my early teens in the back of that van. When my father first bought it there were no windows in the back (it had, after all, been a delivery van) but over time he saved enough money to have some windows put in, and all of a sudden I was able to see the English countryside roll by. Eventually it was replaced by other vehicles, but it is that first Commer Van that I remember the best. I suspect that my son will not even be able to remember the kind of car I had when I was young. Times change, and the speck of dust becomes something else. But I have a feeling that if he ends up blogging in a similar vein to this in 40 years time, the picture might be of an old Sega Megadrive, but the sentiments will be the same. 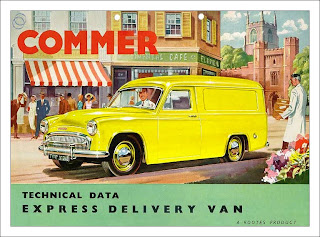 To see photographs of other grains of dust and the memories they preserve, go to the Sepia Saturday Blog.
at July 02, 2010