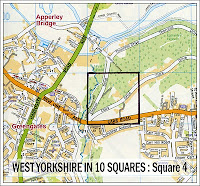 It is Week 4 and, as the random number machine picks my square, I suspect a certain rhythm is emerging : mills, moors, water, woods. It's the rhythm of West Yorkshire itself, a rhythm that seamlessly blends nature and industry. The random number generator has come up with West Wood in Calverley, a patch of woodland that straddles the modern-day border between Leeds and Bradford. The map shows a square with a good many tree symbols, a couple of roads or tracks and a small stream : what more could any explorer ask for? 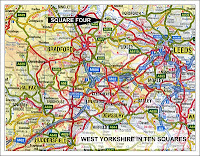 The square in question is half a mile west of Calverley : one of those small  West Yorkshire settlements that are almost a history of the county in themselves. Anglo-Saxon in origin, the village name derives from the Old English word "calfra" meaning "a clearing used for calves". The village followed that well-trodden West Yorkshire path : an agricultural community that, in the eighteenth century, began to cultivate a woolen textile industry, which was, in turn, replaced by a twentieth century commuter community serving the needs of Leeds and Bradford. So, a typical piece of West Yorkshire and a piece that would throw up a number of fascinating connections. 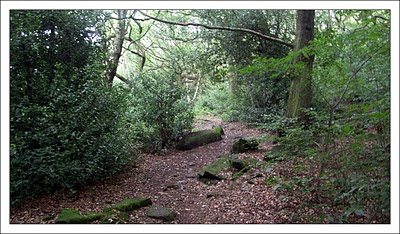 The square is dominated by West Wood which, to the great fortune of everyone concerned, is owned by the Woodland Trust. Visitors are therefore free to wonder up and down the paths and explore the frequent outcrops of millstone grit. Even on the bright day of my visit it can be a dark place, but it is never foreboding : there is always some light breaking through the densest trees, always the call of a blackbird or a wood pigeon to cut through the silence. It is a place of great beauty and peace, a place thousands of people travelling down the busy A657 must pass every day without knowing of its existence. A place waiting to be discovered by anyone with time on their hands - and a convenient random number machine. 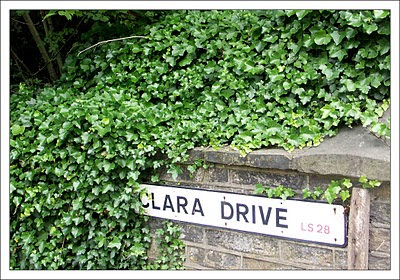 The map square is dissected by two drives which fan out from their common meeting point with Carr Road - Clara Drive and Eleanor Drive. I was keen to discover the origin of these drives that sounded like a cast list from a Jane Austen novel, and what I discovered showed serendipity was alive and well and with me on my odyssey. The manor of Calverley was originally the property of Sir Walter Calverley (who, in order to spread confusion, was also known as Sir Walter Blackett) but in 1754 it was sold to the Thornhill family. The Thornhill family seat was at Fixby Hall, some fifteen miles away and, by one of those strange chances that make life interesting, within a few hundred yards of where I am writing this now. In 1786, Thomas Thornhill married Eleanor Lynne and for a wedding present he built her a Orangery at Fixby Hall. They had a daughter who they named Clara who eventually inherited Fixby Hall. Later she became a great friend of Charles Dickens and it is said that fictional Haversham Hall in Great Expectation was modeled on the house she  owned in Northamptonshire. 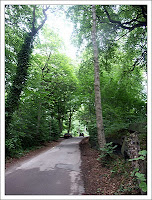 In the early nineteenth century, Thornhill had a plan to make money out of his Calverley estate. He would lay out two grand drives through the woods and sell building plots to the wealthy mill-owners of Bradford. He set out the drives, named them after his wife and his daughter, but only ever managed to sell a couple of plots of land. In the intervening two hundred years, Clara Drive has picked up a sprinkling of houses, but Eleanor Drive remains gloriously unpaved, gloriously wooded, and gloriously quiet.
As you wonder through the woods you keep coming across strange remnants of attempted colonization. An arch will span nothing, a set of fine stone stairs will lead nowhere. Somehow it all adds to the fascination of the place. 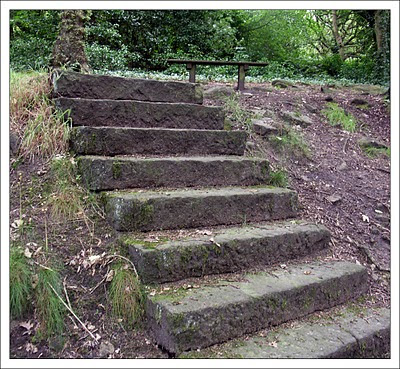 During the Second World War the woods were used for training troops for the D Day landings. In the 1950s there was even a firework factory located somewhere deep in the woods but that tragically fell victim to an explosion. It is almost as if the woods will oppose any attempt to  take them over : to organise them, classify them, civilise them. I have no arguments with that, it is what woods should do. 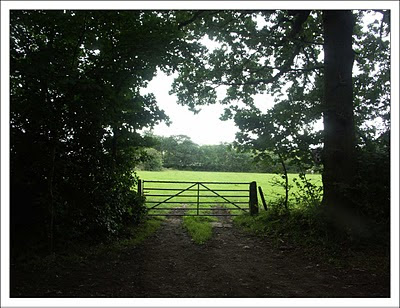 When you get to the edge of the woods, the fields reappear reminding you that you are but a few yards away from normality. At the far side of the field is the main road, and houses and shops and all the comings and goings, all the doings and findings, the gettings and makings that are West Yorkshire. 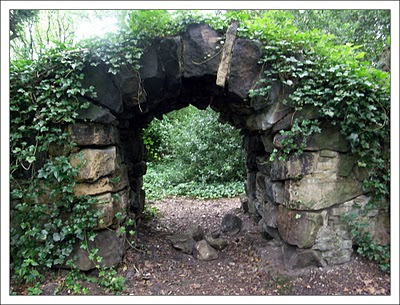 To read the other installments of this series follow these links :
Square 1 : Little Germany
Square 2 : Thimble Stones
Square 3 : Woodlesford 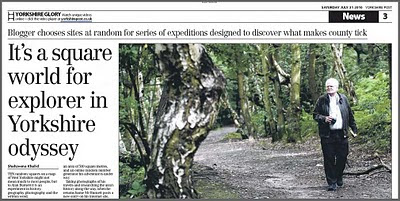