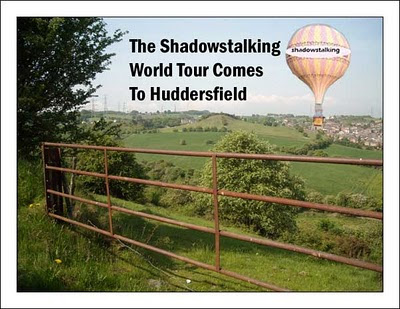 Imagine my surprise the other day when a candy-striped hot-air balloon drifted over Round Hill and settled to earth just short of Bradley Woods and out of the basket climbed my good friend, the Canadian poet Kat Mortensen. (Can I just point out to anyone who has arrived at my blog by chance that us bloggers live in a strange virtual world in which things like this happen with surprising regularity). Kat has just published her first volume of poems - "Shadowstalking" - and has embarked on a world tour to publicise it. I was delighted that her busy itinerary took in West Yorkshire and I persuaded her to join me in the Round Hill Tavern for a chat and a glass or two of Laphroaig before she had to dash off to other appointments throughout Europe. Our conversation went as follows: 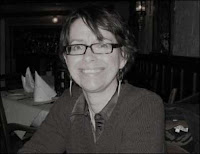 AB : Do you feel nervous about exposing your emotions in your poems?
KM : I’d have to say that I’ve always been a very forthcoming individual. Even as a child, I would talk to strangers (much to the consternation of my mother and father) and give away family secrets. As an adult, I find it most cathartic to put my emotions into a poem and I feel that by sharing my experiences, I am giving people an opportunity to empathize and in many cases work through their own emotions vicariously. I know when I read other poets’ work, it does this for me.
There is always some trepidation about putting yourself out there – exposing your true self, since one never knows how it will be received. That’s when you feel nervous and vulnerable. However, the majority of my poems have been successful and most people “get” them. There are always going to be some that don’t quite hit the mark, mind you.

AB : In relation to your own poems, and other poets you admire, what do you believe are the three most important ingredients of a good poem?
KM : That’s a tough question. I sincerely believe when I write that I must be true to who I am and not try to “fake” it by copying another person’s style or word usage. I don’t force the work; if a poem is ready to be developed, then I run with it. If there’s nothing in my mind, or I’m struggling with an idea, I don’t compel myself to write. I like to let things stew. (This is an excellent way to avoid the “writer’s block” trap, by the way.)
I’m not sure if I’ve answered your question.
I think what I admire in other poets is honesty, a sense of what’s real and a bit of fun. I guess that’s what I hope is in my own work.
I cannot tolerate poets who write angsty poems that really have no meaning. I don’t mind a bit of free-thinking, but if I get lost or bored by the third or fourth line, you can be sure I’m not going to seek out their work again.

AB : What is the best single line - poetry or prose - you have ever written?
KM: That is an even tougher question. I do know that my favourite poem that I’ve written thus far is, “Snow Upon Snow”. It’s a piece that just came to me one winter’s day when I looked out my kitchen window to see a worker in the cemetery behind my back fence finish up after a funeral. I can’t confine it to a single line because the verse is really one line:

There’s a corpus delecti descending today;
I dream that the Angels are holding at bay,
The demons who prey on the newly laid low,
And silently falls, the fresh snow upon snow.

One of the reasons I like it is because it puts me in mind of the Christmas Carol, “In The Bleak Midwinter” which has the line, “Snow was falling, snow on snow...” It's been a favourite of mine for a long time.

Dave (The Barman) : Another couple of malts in there?
AB : You don't need to ask.

As I escorted Kat back to her waiting balloon, I asked her where she was heading for next and I have to say that her reply lacked the coherence of her usual splendid verse. As the balloon rose into the evening sky and followed the M62 west in the direction of Manchester I wished her well. It may be some time before I see her again and therefore I have ordered a copy of her book. And knowing of her work from her blog, I would strongly recommend the volume to everyone else. Kat has set up a dedicated blog for the book and it contains a link to buy your own copy. Check it out. 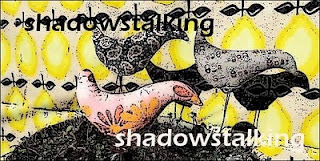