John Hodge And The Overdue Stove 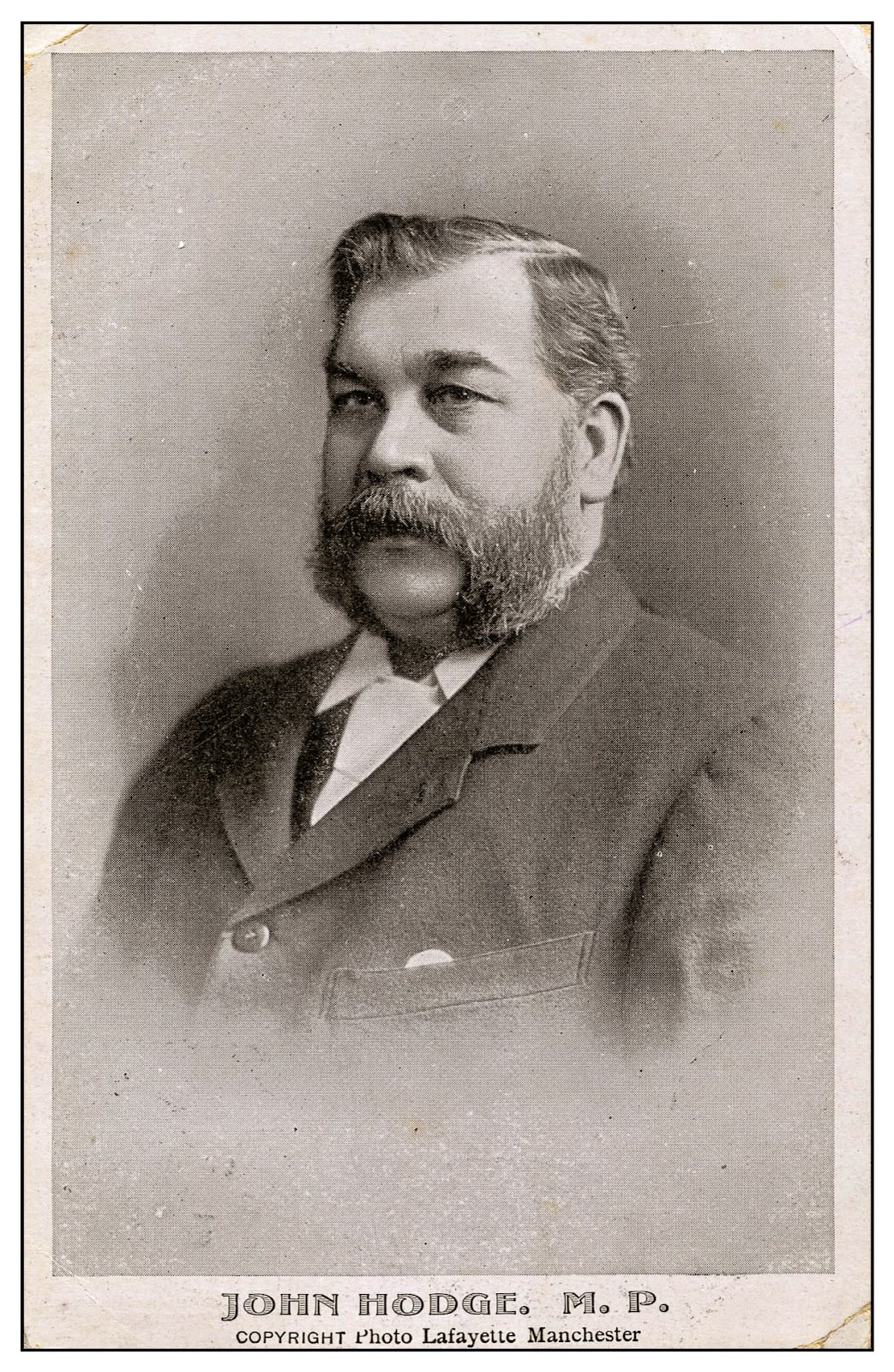 This picture postcard of the Labour politician John Hodge dates from 1906, the year Hodge was finally successfull in his quest to become a Member of Parliament. He was 51 years old when he was elected as the MP for Manchester Gorton in the General Election which saw 29 members of the new Labour Party being returned to Parliament. It was a time when politicians could match music hall stars as the postcard celebrities of their day, a time of change when the working class were beginning to understand the potential political and economic power that lay within their hands.

Like so many of the other Labour leaders of the time, Hodges background was in the trade union movement. Born in Ayrshire, Scotland he had worked as a puddler (an intensely physical job that involved stirring great vats of molten ore) in the local iron works. He became one of the founder members of the British Steel Smelters’ Association - a union he later became the General Secretary of - and he went on to hold high office in the British trade union movement including President of the Trade Union Congress in 1892.

The outbreak of the Great War brought deep divisions to the British Labour Party which was made up of elements that were pacifist and internationalist and other elements that were fiercely patriotic. Hodge was firmly of the latter persuasion and soon was claiming that all strikes during wartime were not only unpatriotic but indeed were acts of treason. He became a leader of The British Workers’ League, a movement that started as patriotic and increasingly became anti-socialist and right-wing. In 1916, Hodge - who was still a sitting Labour MP - was invited to become a member of the wartime coalition government of David Lloyd George and became the very first Minister of Labour, and a year later he became Minister of Pensions, a role he kept until the coalition collapsed in 1919. He remained an MP until 1923 and remained a trade union leader until 1931. He retained his right-wing, anti-strike beliefs throughout this period and strongly opposed the General Strike in 1926. He died in 1937. Arthur Griffith-Boscawen, a Tory Cabinet Minister who had worked with Hodge during the First War described him in what he no doubt saw as a complimentary way as: “a fat, rampaging and most patriotic Tory working man”.

If we turn Hodge over, we find the most interesting story of an overdue stove. The card is addressed to a certain Mr Kirby, the Manager of the Stove Department at Rochester Gas Works. Dated the 20th October 1906, it was sent by a certain Albert Ellis Lucas, an engineering pattern-maker of Edinburgh Road in Chatham, Kent. The message reads as follows: 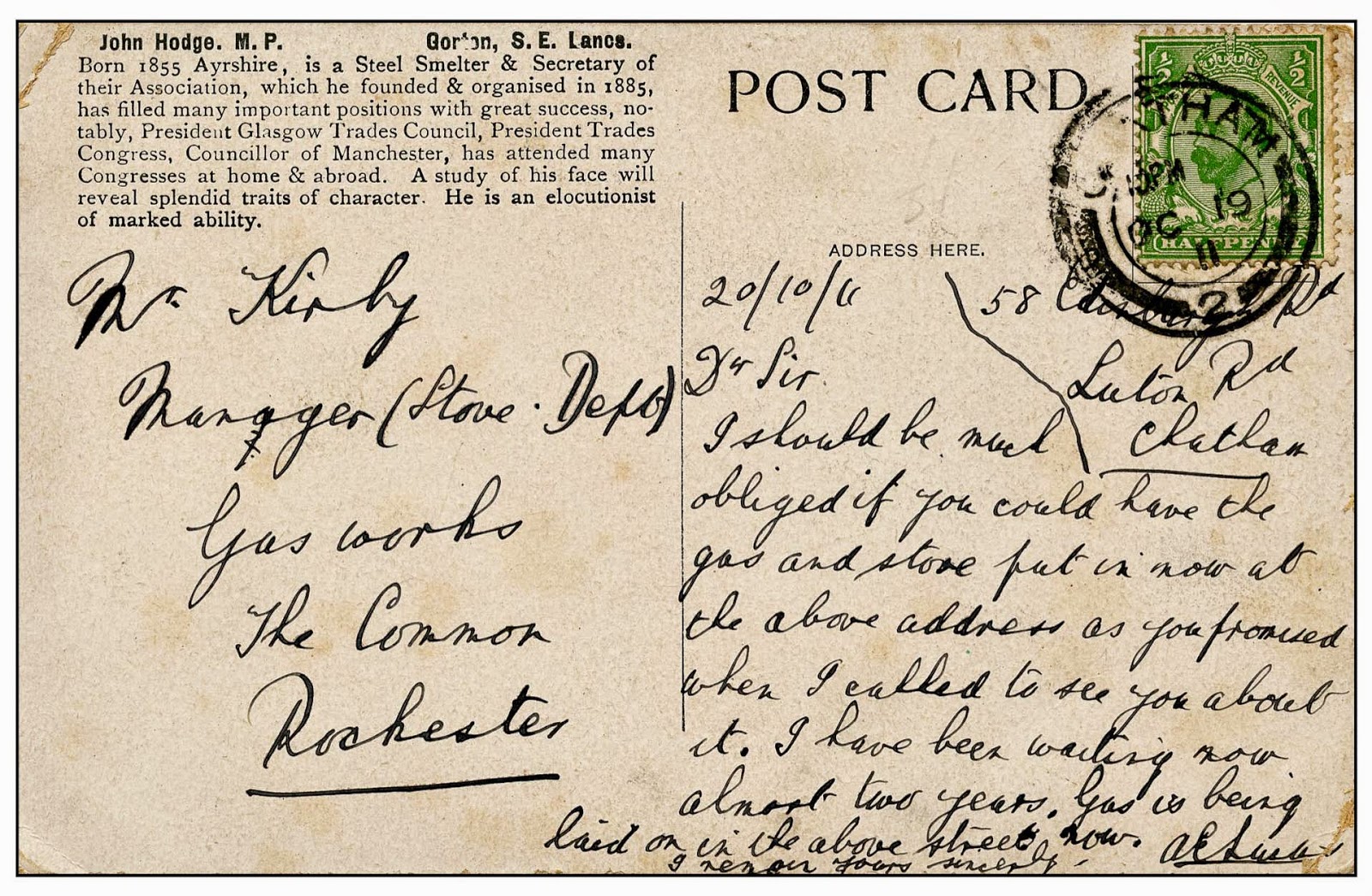 Dear Sir, I should be much obliged if you could have the gas and stove put in now at the above address as you promised when I called to see you about it. I have been waiting now almost two years. Gas is being laid on in the above street now. I remain, yours sincerely, A E Lucas.

As someone who has spend a significant proportion of his life waiting for the gasman to come, I have every sympathy with Mr Lucas. One can’t help wondering whether it was an iron stove made by Mr Hodge or one of his members. If so, John Hodge would certainly have approved. Or perhaps it was late because the gas workers had been on strike. If so, John Hodge would certainly have disapproved.
at January 12, 2015